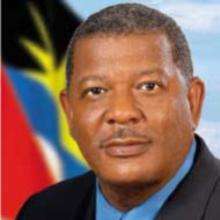 Mr. Spencer first gained employment at the Worker’s Voice Newspaper in the late 1960s.  He engaged in administrative duties with the Dows’ Hill Tracking Station then with AIDE, a subcontracted firm engaged for the WIOC’s tank expansion project in the early 1970s.  He was also engaged with the Antigua Star (Tim Hector’s publication) before he joined the Antigua Workers Union as an Industrial Officer.  He served asVice President of the AWU and Assistant General Secretary of the AWU, while elevating to Senior Labour Relations/Industrial Officer.  He also served as President of the Caribbean Maritime and Aviation Council.

His most significant employment was as Prime Minister of Antigua and Barbuda from 2004 – 2014.  He also served as leader of the Opposition from 1989 – 2004.  During his tenure as Prime Minister Mr. Spencer was bestowed an honorary doctorate degree from Mid-Continent University, Kentucky. The accolade was in recognition of his work in the development of the people of Antigua and Barbuda, the international community, sports and culture. He retired from the House of Representatives in 2018.

Former Prime Minister’s Spencer’s pathway to ‘chief servant’ began in the Antigua Trades & Labour Union (AT&LU) Juvenile Section at the age of 10.  He recalls being an active participant from the tender age through to being a part of V.C. Bird’s campaign in the 1965 general election.  He was one of the speakers at the mass gathering held at the West Bus Station as part of VC’s team in the then AT&LU’s successful bid at the polls.

His first political appointment was as one of two representatives from St. John’s Rural West on the AT&LU’s Central Political Committee along with Johnny Piggott (father of PLM’s candidate George Piggott).

Former Prime Minister Spencer recounts that he was a member of the AT&LU employed by the union’s newspaper, The Worker’s Voice, at the time of the series of incidents which resulted in the expulsion of George Walter, Donald Halstead and the other individuals from the organisation.  He reflects that he was on his way to work from Green Bay the day after the expulsion and he faced questions by many as he crossed through the Public Market, wanting his perspective on the incident, of which he had no clue.  At the office he met with the principals of the paper Messrs William Buntin, Novelle Richards and Levi Joseph who brought him up to speed on the events and the outcome.

In the immediate aftermath of the debacle, Spencer recalls penning a piece for the newspaper which opened with a quote from Bertrand Russell thus “Men fear thought as they fear nothing else on earth — more than ruin, more even than death.”  The paper’s editor Mr Levi Joseph expressed concern with the piece’s content and barred its publication.  Noteworthy was Sir Vere’s response to the incident when the infraction was referred for action.  From all accounts Spencer was to be left alone as “the future of Antigua (and Barbuda) will rest with him (the youth).”  Papa would intervene in Spencer’s defense on other occasions to include attempts to derail his opportunity for further studies.

Spencer recalls his abrupt, forced parting from the Workers Voice and the AT&LU.  Upon returning from his studies in Canada in 1969 he was advised by the new General Secretary Adolphus Freeland of the union’s inability to continue his employment, thus he sought employment elsewhere.

Spencer shared the invaluable experiences of his educational experiences beyond his native shores. His stint at Coady International was an eye opener.  His exposure to the principles of social leadership, namely community development and the cooperative movement, combined with the worldwide assessment of politics solidified his trade union groundings. He remembers his staunch though solo defense of the success of a single tiered political-union relationship given the progress fought for and gained by the ATLU institution up to that time.

At Ruskin College in England (1971) he got an enhanced philosophical appreciation of the movement and got directly involved in the strikes (Yorkshire) and demonstrations (London).  His thesis was titled ’The Political Involvement of Trade Unions – The Antigua Experience’.

Beyond the influence of Sir Vere as his early political influencer and motivator, Mr. Spencer recounts the invaluable support of Milton Benjamin and a Mr. Fredericks (Trinbagonian industrial/public relations officer at WIOC) both of whom assisted to ensure he met the matriculation requirements for the Ruskin program.  He also pointed to then General Secretary of the Antigua Workers Union (AWU) Keithlyn Smith, who approached him to get involved with the daily function of the union, after the exodus of key members of the organisation to form the government after Progressive Labour Movement’s success in the 1971 general election. He served briefly before departing for his studies.

He fondly remembers hearing of his appointment in absentia to his first position in the AWU.  Donald Halstead announced at the union’s section meeting in Grays Farm that ‘Brother Baldwin Spencer had agreed to be the Education Officer for the AWU’ to rousing applause and approval.  After initially refusing, he eventually gave in to the very popular support and accepted the appointment.

Former Prime Minister Spencer was the consummate community activist. He was involved in all community activities, many of which paved the way for his involvement at the national level.  His involvement in the management of the Halcyon Steel Orchestra from shortly after its inception to present, and his Presidency of the Empire Football Club, stand as his most heralded community involvements. He served as President of the Antigua & Barbuda Pan Association and as an executive member of the Antigua Barbuda Football Association.  He has impacted hundreds in his community involvement distinct from his political service.

Transition to Hardcore Politics – Spencer supported the PLM and Selwyn Walter’s candidacy in Rural West in the 1971 (won) and 1976 (lost) general elections.  He lost a primary run-off to Walter in the run up to the 1981 election but stayed on as the campaign manager in a losing race.  He lost in a hotly contested election against Donald DC Christian in 1984 before winning the seat in 1989 and serving six (6) terms as the Member of Parliament (MP) for the St. John’s Rural West Constituency, until 2018.

When asked for his views on elections in his homeland, he noted that the democratic process of elections “may have been free but not always fair. The challenges in terms of fairness never had disastrous impact, rather it behooved the parties to remain vigilant always.”  In 1999 Spencer went on hunger strikes and organized public demonstrations to campaign for electoral reform after a controversial election in March of that year.  His actions contributed to the establishment of the Antigua and Barbuda Electoral Commission, an independent entity to oversee future elections.

Speaking on his legacy as Prime Minister he said ‘I became Prime Minister at an extremely difficult time for Antigua and Barbuda. We had an awful image, the most corrupt government in the Caribbean. We had a serious issue with our image as a country in the international community.  One thing that stands out during my 1st tenure, is to be able to reverse that image. We were welcome once again among the community of nations to be dealt with on an equal footing. I want to credit myself and my administration for having turned that around and created a more acceptable situation where Antigua and Barbuda was recognised as a nation of laws.”