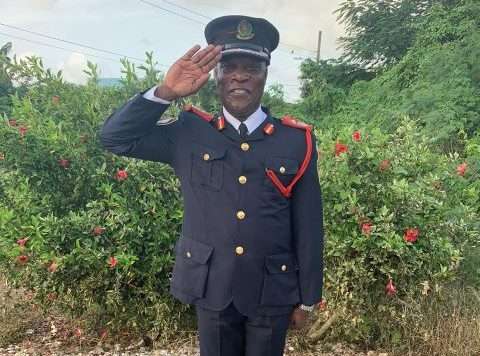 March 23rd, 1960- Elvis Weaver Esquire, Assistant Commissioner of Police,  was born to Ferdi and Christelyn Weaver in the village of Liberta where he was also raised. He attended the Liberta Primary and All Saints Secondary Schools. During his time at these institutions, Weaver would demonstrate the positive values, such as being respectful and polite, instilled in him by his parents, mainly his mother. This display of positive behaviour earned him a good rapport with his teachers which he continues to maintain today.

As a young boy growing up, Weaver found himself intrigued by the police officers from within his community and this inspired him to join the force. Upon leaving secondary school, he enlisted in the Royal Police Force of Antigua and Barbuda on February 1st, 1979 and officially began his training in May of that same year. Upon ‘passing out’, as he called it, for there was no actual graduation ceremony as we are accustomed to today, he was attached to the beat patrol at the St. John’s Police Station. It was during this time that Weaver felt a calling to the fire service and put in a request to be transferred to that department which was approved in October, 1980.  Weaver served at the St. John’s Fire Station for eight (8) years and received his first elevation to Corporal in 1988.  He was transferred to the Coolidge Fire Station as Supervising Officer.

Throughout his time as a fire officer, Weaver has been stationed at the Coolidge, St. John’s and All Saints Fire Stations. Over the years,he continued to exhibit a high level of discipline and commitment to his duties. He was selected to represent the organization in a multiplicity of Regional and International Courses. Weaver was the first Fire Officer to represent Antigua and Barbuda in pursuing the Junior Command Programme – held in Jamaica (in 2007). This was the inaugural programme of its kind. Another of his academic highlights is his successful completion of Police Management Studies at the Jamaica Constabulary Staff College (Department of Academic Studies), in 2008.  He was consistently awarded for good conduct.

In 2015, following his elevation to the rank of Assistant Commissioner of Police, he was appointed as the Fire Chief in command of the Fire Department. He remained Fire Chief until his retirement.

During the 2021 Citations Meritorious Awards Ceremony of the Royal Police Force of Antigua and Barbuda  ACP Weaver was recognised as the longest serving member of the Force.   He also received the long service medal and meritorious award  and a Certificate of Honour in recognition of his service on the Force from Independence through 40 years.

ACP Weaver considers his role as head of the fire department a fulfilling one. Though challenging at times, he enjoys leading and helping those under him to develop to their full potential.   He credits his successes over the years to his strong Christian values which were instilled from an early age. One word of advice that he has for young persons coming up is “commitment, good discipline, respect for authority and love for your fellow men will take you far.”

One regret that he has going out is not being able to see a separation of the fire brigade from the regular police force which he vigorously fought for over the years. It is his hope that his successor will take on the mantle and continue the fight, as he believes that this separation can open opportunities for training and other areas for firefighters.

Commissioner of Police Atlee Rodney shared with PetraTheSpectator.com on ACP Weaver.  “Mr Weaver has been a valuable resource officer and an asset in the police force for over 40 years.  He has contributed to every aspect of the organization; both in his official capacity and in social events such as sports. He is an accomplished Firefighter and has provided leadership to the Fire Department for a number of years. During his tenure as fire chief he has initiated several programs which have motivated the officers to perform well.”

Specific to how ACP Weaver has impacted his term as Commissioner of Police, COP Rodney stated “since attaining the responsibility of commissioner of police, ACP Weaver  has been a great team player and has greatly contributed to my mandate of providing quality leadership of the organization.  He did not attain all his set goals but he has definitely set the stage for greater things for the future of the Fire Department.”

With reference to Weaver’s retirement Commissioner Rodney concluded “On behalf of the entire police force I say “a big thank you “ for his years of service to the organization and the Nation.  We wish him all the best wishes in all his future endeavors.”

Outside of his regular duties as an officer, Weaver is also a cricketer who has played Parish League Cricket for the Liberta Cricket Club. He also represented the Police Cricket Team during their tour of Barbados for a regional police cricket tournament.

After 43 years of service to the force, ACP Weaver proceeds on retirement where he plans on pursuing his personal hobby of farming as well as traveling to see family and friends.