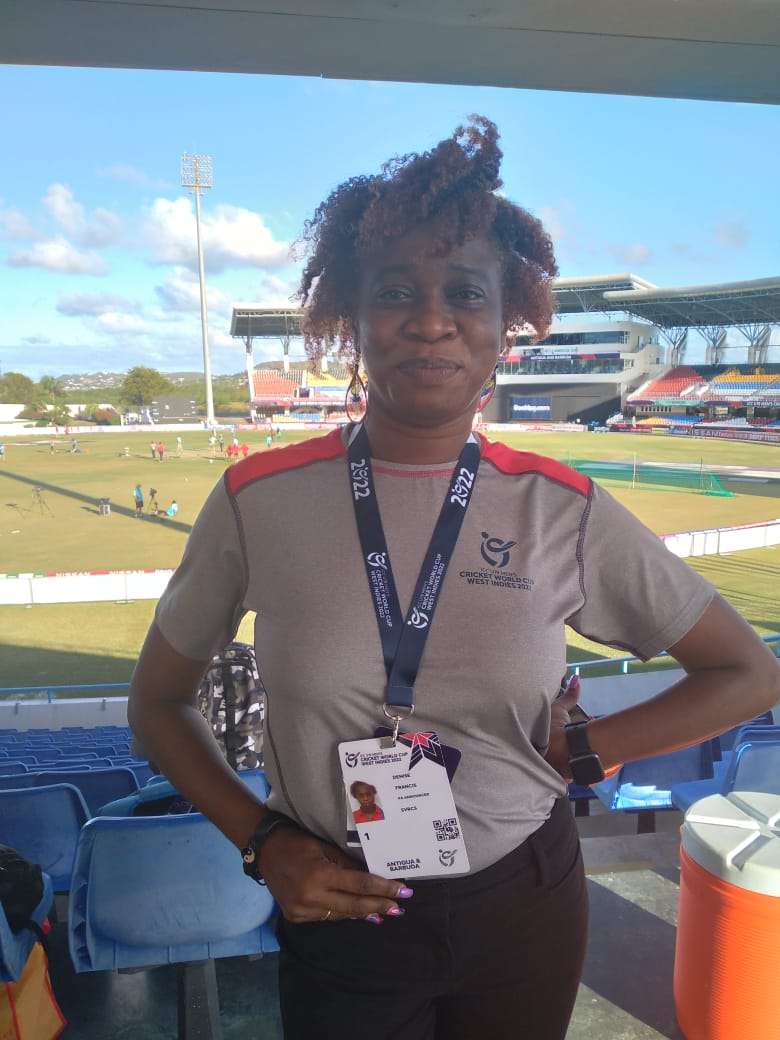 January 26, 2022 – Patrons of the ICC U19 Quarterfinals at the Sir Viv Richards Stadium are greeted by the voice of Denise Francis who will serve as the PA Announcer for the duration of the tournament.  This is an important first for sports, in particular cricket, in Antigua and Barbuda as Ms. Francis will be the first female voice serving in that capacity.

That Denise will be a cricket today is expected, she is a lover of the sport and avid spectator and armchair commentator, hardly ever missing matches.  Given her media background the move into announcer is well suited.

Mickel Brann-Challenger longtime media colleague of Denise, surmised her media experience. “Denise would have started at Observer as one of the angels of the morning, and after that program was canceled, she filled in on air for different people as an announcer and playing music.  She was in charge of a lot in terms of production. She efficient and good at that, so a lot of the carnival productions, the outdoor broadcast that was Denise.”

On her connection of media and cricket Mickel was clear. “Denise knows the ins and outs and obviously she is umbilically linked to sports, not just through her father, stepfather, her parents, her DNA, but just even in her own persona.  So everything that’s happened has prime-time prepared her for this moment.  She’s been a good student of sports and media and so yeah this is a fantastic next step for her.”

Denise Francis is a graduate of the Foundation Mixed School, Antigua Girl High School, Antigua State College (Advanced Levels), Antigua Barbuda Institute of Information Technology. She holds a Bachelors in Business Administration with a minor in Entertainment and Media Management from Monroe College.

Her professional pursuits include team member of the entertainment department at Sandals Antigua for 7years, on-air host and producer at Observer Radio for 7years, and acting in a number of productions and as producer for HAMA Productions. She has worked with a number of other organizations involved in media, entertainment and the creative industries to include chairing the soca monarch sub-committee for the annual Carnival festivities and as a producer for Miles Ahead Productions. She is currently the Executive Secretary at Ministry of Education and Sports.

On this latest appointment Denise expressed her delight.  Unusually brief she said “I’m excited! Honored that from a simple conversation where I said imagine if this was being done by a female I am now part of the team.”  She reflected as well, “feeling emotional that with the first time doing this I can’t share this with Frank-I”