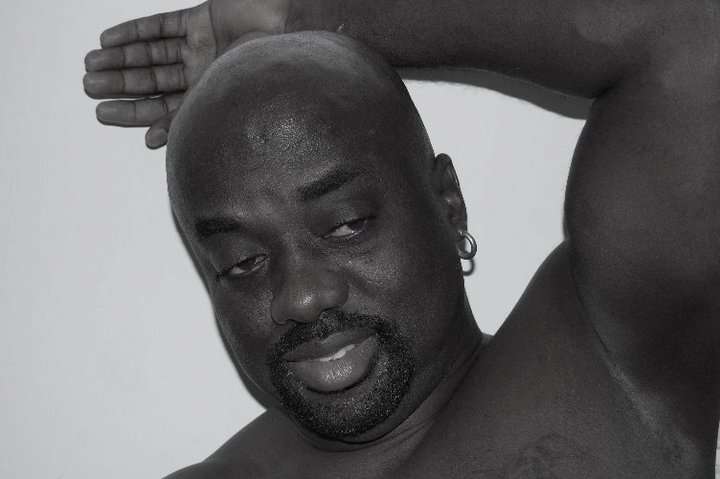 He attended the Green Bay Primary School and the Ottos Comprehensive school.  Post his secondary education Calvin found employment as a teacher, in banking and bookkeeping.

He was employed part-time as a model which was his introduction to the fashion industry, his life’s passion and work.  His path as a fashion designer began with his studies in New York at the Fashion Institute of Technology.  He was groomed in all facets of the industry and soon ready to return to home to become a pillar of the fashion and entertainment industry.

In short order, Calvin stamped his arrival on the local fashion scene with the opening of his first boutique, “Black ‘n’ Black” in 1989.  The store, located in historic Redcliffe Quay, was so named in honor of his mother, whom he held in high regard as a chic and fashion forward individual.  Black ‘n’ Black attracted a strong following by a wide cross section of the outgoing local population and tourists.

With the maturity of his design senses, he upgraded his brand to Calvin S Designs, carving out a niche for locally produced classy, sophisticated look for any event.

Along with his keen sense for design, training models and executing boutique fashion shows mainly for the tourist sector, Calvin was an avid lover and a participant in the annual summer festival activities associated with Carnival in Antigua.  He recalls playing mas from as early as nine (9) years old and his annual participation in many aspects of Carnival from then to present.

This passion of Carnival was further harnessed through his fashion sense and design passion as he trained and designed for queen contestants for decades, winning many segments and top prizes over the years.

Calvin merged his love for fashion and pageantry eventually resulting in the founding of Antigua Pageants Ltd in 2000.  His mission, to have Antigua and Barbuda represented in international beauty contests such as Miss Universe, Miss World, Miss Earth and Miss Intercontinental Pageants.  Through significant investment pageantry became a valuable platform for international exposure contributing to the awareness of the brand Antigua and Barbuda.  The first National contest was held under the theme “The Birth of Beauty” on March 3rd, 2001.

Outstanding participants who made an impact internationally were Ms. Kai Davis who won Miss Congeniality at the 2003 Ms Universe pageant and Ms Shermain Jeremy who won Miss World Talent in the 2004, 54th edition Ms. World Competition and placed among the top ten.

Personal and professional development were important components for Calvin’s vision.  To this end he founded Southwell Models inc. where young aspiring models were trained to twirl, pivot and strut their stuff, while on the road to fulfill their dreams.  Southwell Models Inc also bore fruits among which we count talented local designers to include K B Squared, Henre’ Designs and J. Simon Bridal and Couture.

In 2010 Calvin’s quest for the next level witnessed his partnership with local mas band Dynamics and presented a section “Beautiful People”; it was an overnight success.  The following year he registered his very own mas band retaining the name “Beautiful People”, with the theme ‘What happens in Vegas’.  The band found favour with the judges for the design and splendour of the costumes that year.  Beautiful People continued for several years, becoming known for its creativity and impact with spectators and judges up to 2017.

His work in the development of the fashion industry and pageantry was recognised nationally in 2003 when he was awarded the Grand Officer of the Most Illustrious Order of Merit (GOM).  In 2014 the Antigua and Barbuda Festivals Commission declared him the Grand Marshall of the Opening Parade in recognition of his outstanding contribution to the annual summer festival. He also received recognition for his work for annual independence festivities.

Calvin has also represented Antigua and Barbuda regionally and internationally. A highlight was the country’s first participation in Caribbean Fashion Week in Jamaica in 2007 (7th edition).

Calvin has encountered numerous challenges during his trailblazing adventures.  Among them has been the lack of tangible investment in the creative industry, which is still desperately needed for the growth of the overall sector. He envisages the injection of sufficient capital to embolden young creatives to be more into fully commercial and export opportunities, critical for the growth of the sector.

Personally, a devastating fire in 2014 which destroyed his band house and commercial operation served to set back the progress towards restoring in full his House of Fashion.

December 2019 was life changing for Calvin. He suffered a stroke which left him unable to speak and perform his regular daily routines.  His recovery remains a work in progress with a renewed passion and gratitude for the gift of life.

Fashion remains his passion, but life’s lemons most days leaves him tending to his garden and appreciating the simple things life has to offer.