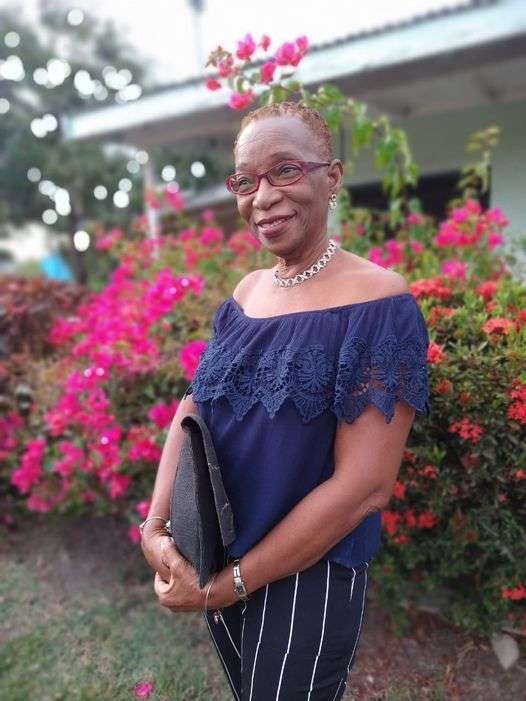 June 7, 1951- Beverley Skerritt was born. Originally hailing from the Emerald Isle, Antigua became Beverley’s home at the age of two. Her parents, Beatrice and John Skerritt, were both teachers, affectionately known as Teacha Bea and Teacha John. Her father eventually joined the Leewards Islands Civil Service and was transferred to Antigua for work, bringing his young family with him.

Beverley attended the Foundation Mixed School and the Antigua Girls’ High School and then worked in the government system. Her longest tenure was at the TreasuryDepartment, where she eventually served as Deputy Accountant General.

Beverley became a member of the Harambee Open Air Theatre in the 1970s, with several of her school mates, including founder and Director, Dorbrene “Fats” O’marde. Beverley would have toured the Caribbean and graced the Antiguan stage in the 70’s and well into the 80’s with Harambee.  Dobrene recalls Beverley featured in the cast member for every production and was an integral part of Harambee’s administrative team.  He credits her with being part of the three-person team who held the institution together.

She was also a part of  Zucan Bandele’s Roots Krokus, a renowned dance troupe while it lasted.  When Harambee faded away she eventually took up ballroom dancing and has several gold, silver and bronze medals for competing in the Regional Ballroom Classic.

Now enjoying retirement, she is the co-founder and one of the lead instructors for the Line Dance Connection ensemble. This group was originally formed as a health and wellness activity for Anglicans, and the general public, to participate in. It has now grown into a full dance ensemble, and Beverley can be seen taking the dance floor by storm on any occasion where music is playing.

Beverley has two adult children, one grandchild, but a plethora of extended children and grandchildren to whom she has opened her home, arms and heart to.

Beverley is an active member of the St. Andrew’s Anglican Church, where she has led dance and drama for years, and currently serves on one of the Church’s boards, and is one of the lead ushers at St. Andrew’s.