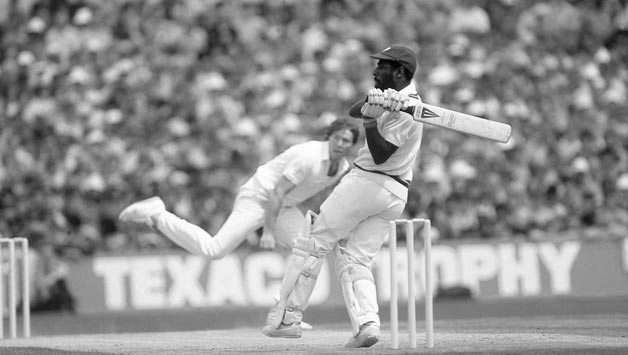 May 31, 1984 – Sir Viv Richards scored on of the greatest one-day international (ODI) innings ever with a spellbinding 189 from 170 balls not out, to include five (5) sixes and twenty-one (21) fours, against England at Old Trafford. Noteworthy is the 86 runs from the last 58 balls of the innings which included nine (9) fours and five (5) sixes. The overall strike rate 111.18.

Richards took on the English bowling attack and led a massive comeback for his team. His first ally of note was Baptiste (26 runs, 49 balls) with a 59-run partnership, then Garner (3 runs, 5 balls) fell. Undeterred Richards was abetted by Holding in a last wicket partnership of 108 runs, of which Holding scored 12 runs from 27 balls.

Inside his outstanding innings Richards completed his hundred with a punched on-drive off Botham, his close friend and then Somerset team-mate. It was his 7th one day international hundred off 112 deliveries, with 12 boundaries.

Among remarks by the commentary team it was said, “The ball kept disappearing into the crowd and beyond. At the end of the mayhem, the once buoyant Englishmen gingerly clapped the master back to the pavilion, having lost the last inclination to fight back.”

At the end of the spectacular innings Sir Viv walked off the field to a standing ovation around the park with added jubilation from the West Indians littered among the spectators.

Viv Richards hooks Derek Pringle to the boundary on his way to a record 189 not out. He added 106 for the last wicket with Michael Holding, Richards scoring 93 of them © Getty Images

Embed in the body please (the youtube link below).