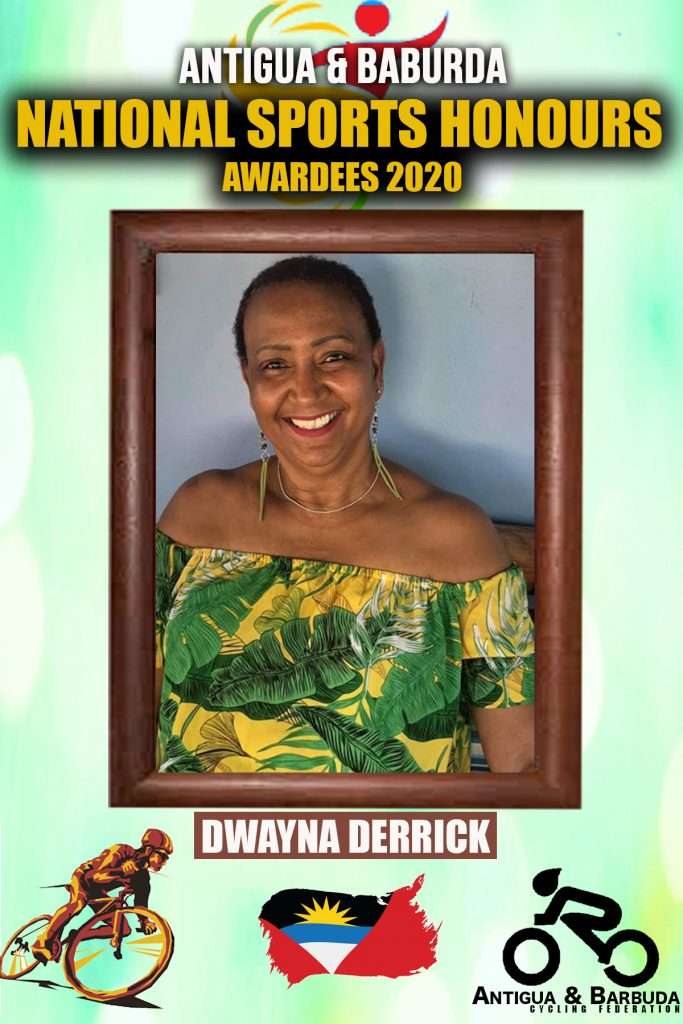 The Antigua and Barbuda Cycling Association celebrates the invaluable contribution of Ms. Dwayna Derrick during her 8-year stint as Treasurer of the Association.

During her tenure as Treasurer, Dwayna introduced generally accepted accounting principles to the organization, overseeing the management of the financial affairs, including the day-to-day financial affairs. She organized and managed many fundraising events for the Association, to include the popular Family Fun Rides which recorded over 650 participants and resulted in the increased numbers of junior cyclists.

Cliff Williams who served as President during Dwayna’s tenure shared on her stewardship. “Her professionalism boosted the performance of the entire management team, the sport and presidency. She was very strict when it comes to time management forcing us to do better with the starting of our races etc. The pleasure as a President was knowing that the finances is well managed, collected, accounted, and updates provided almost at a click of the finger. This is the comfort I had working with her. With this kind of accountability allows you to reach for higher heights in terms of taking on bigger events, knowing your financial position and what you can manage.”

Dwayna was an instrumental part of the team that managed Antigua and Barbuda’s successful hosting of the 2005 OECS Cycling Championship. That year witnessed the revival of the event which has since gone on to become a popular fixture in the annual regional sports event calendar.

Beyond her management competencies, Dwayna is the first recorded female competitive cyclist in Antigua and Barbuda. According to the Cycling Association biograph submitted “her efforts as the lone female competitor attracted many other female riders to develop this class to the largest of all time.”

MORE ABOUT DWAYNA DERRICK
Dwayna Derrick’s love affair with sports started at the Antigua Girls High School. She represented her school in Athletics and Netball between the years of 1975 to 1980. She went on to play netball at the community level with the dominant Paris Shoes Eagles netball team.

She was a member of the National Athletics Association serving as a member of the executive and as treasurer for many years. She was the chaperone for female participants in Antigua and Barbuda’s team for the 1988 Olympics in Seoul Korea.

Beyond sports, Dwayna served as treasurer of Friends of Holberton Hospital before it was closed and then MSJMC opened. She is presently President of Friends of MSJMC an organization which raises funds to support capital projects (purchase of equipment etc.) for the health facility.

She was also treasurer of the St John’s Cathedral Short Term Fundraising Committee which spearheaded the raising of funds for the restoration of the Cathedral.

She is a dedicated Anglican and the treasurer of the Anglican Church Women’s Association.