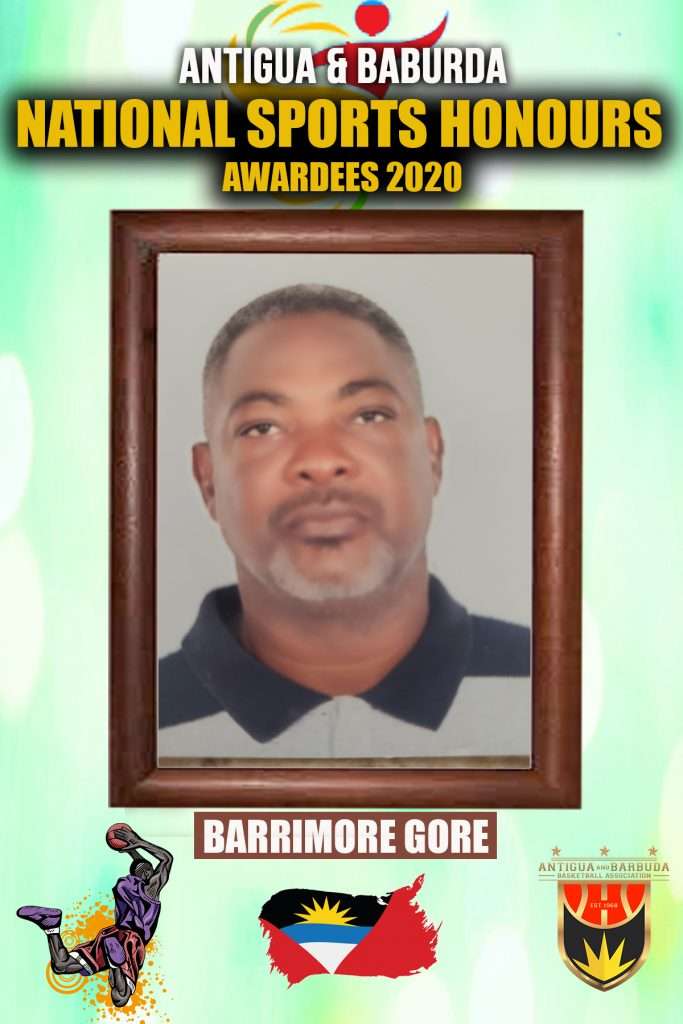 The Antigua and Barbuda Basketball Association (ABBA) salutes Barrimore Gore for his 36 plus years of community activism and service to the basketball fraternity.

Barrimore Gore more popularly known as “Buntin” to everyone in the Ottos Community was born on DeSouza Road and raised in bottom Ottos. He attended the Golden Grove Primary School.
Although Gore grew up playing cricket and football for his community, his love for basketball was unmatched. One of his fondest memories of the sport, was playing basketball on a dirt surface or “dirt court” with his bare feet, before transitioning to asphalt.

Buntin was a force to be reckoned with on the court. He has been an active participant in the sport for over thirty-six (36) years playing for the Ottos Rangers and Cobras for twenty (20) years and the Ottos Basketball team for six (6) years.

His proficiency in the game and his giant stature resulted in Gore’s selection to represent the Antigua & Barbuda for four (4) years.

In the last season, the team was quite successful by winning 19 out of 20 games in the ABBA League. For the upcoming season, his aim is to create another third division team, which is primarily geared towards keeping young men in the community active and away from negative activities.

Adonis Humphreys, colleague national basketballer reflects fondly on Buntin. “I’ve known Buntin almost all my life as I grew up in the same area and loved the game. He is that father figure that alot of the guys in the community could look up and go to. He is a great role model for us. He always ensured the court was clean and in good shape for us to play. He is always talking about youth development and giving back. Buntin is a responsible community person in which we in the community have the out most respect for,” said Adonis Humphreys, national basketballer.

Buntin has also worked assiduously for the past 10 years as the self-appointed caretaker of the Health Centre (Ottos) Basketball Court and the building. It is noteworthy that his efforts has garnered the support business owners in the community whose annual sponsorship under his direction ensures that the facility is well maintained, among the best community facilities across the twin-island nation.

He can often be found on the court making repairs and ensuring the complex is ready to facilitate both recreational and competitive games.

MORE ABOUT BARRIMORE ‘BUNTIN’ GORE
Mr. Gore is a thriving entrepreneur who owns the restaurant Sweet B’s in Lower Ottos. He recently opened a second branch of his enterprise close to the Ranger playfield.

According to many in the Ottos community who have benefited from Barrimore’s largesse over more than two (2) decades He presents a tough shell on the outside, but it has served his well in terms of his commitment and dedication to the people of Ottos. Beyond the tough exterior is a kindhearted person always ready and willing to be of service.