The Antigua Trades and Labour Union (AT&LU) is a workers’ organization was conceptualized after the 1938 visit of the British Moyne Commission which was on a Caribbean tour to investigate the labour disturbances and the socio-economic conditions in the West Indian Colonies.

Sir Walter Citrine, General Secretary of the British Trade Union Congress who was a part of the travelling commission, in his address to Antiguans and Barbudans who attending one of the meetings called by the Commission made an impassioned presentation encouraging the formation of a Trade Union through which the ‘collective strength of a downtrodden people can be forged into a bundle of sticks which cannot be easily broken.”

The 39ers elected Mr. Reginald Stevens as the first President; he served from 1939 until 1944. Mr. Berkley Richards was the first General Secretary, Mr. Clemenceau Perry the first Treasurer and Mr. Randall Lockhart the first Legal Representative.

Among the 39ers were Mr. Norris Walter noted for being the ‘provider of funds’, Musgrave Edwards the first editor of The Workers Voice, J. Oliver Davis who wrote the first ALP Manifesto in 1946 and McChesney George the first Barbuda Representative. 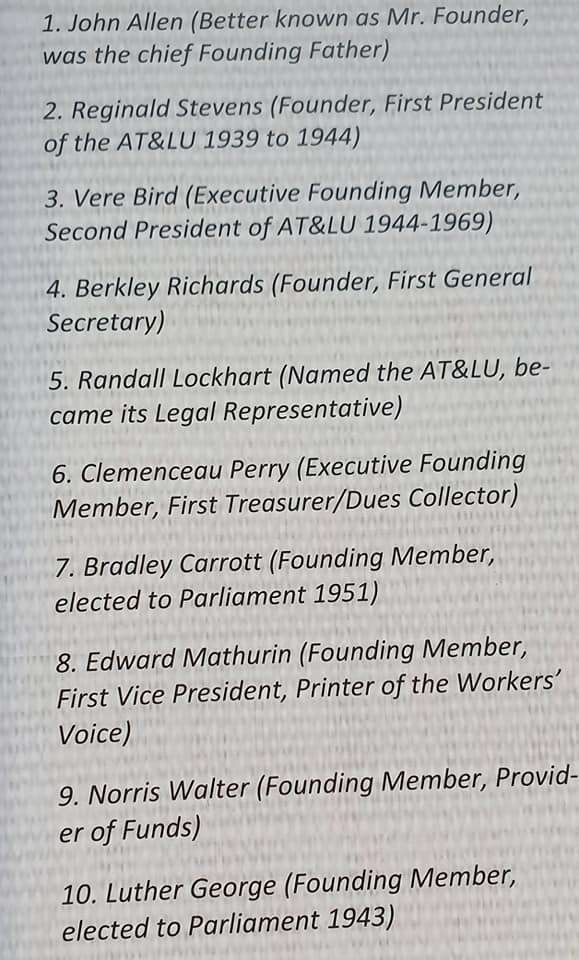 The 39ers also included many who went on to play very important roles in the development of the twin island nation in various roles to include: politics, law, trade unionism, literary arts, documenting our history, education and women’s rights.

The AT&LU, recognising the importance of political power to fueling the improvement of workers’ rights, created a political committee that functioned as a political party, beginning in 1943. Through that party the AT&LU directed national development winning every election up until 1971.

Though the party (ALP to ABLP) has since become a distinct institution from the Union, there remains a working relationship in recognition of the familial ties.

Today, the AT&LU now represents more than 5,000 workers, including non-established Government employees and scores of private sector enterprises. The Union is currently led by President Mr. Wigley George, a career trade unionist who has more than three decades of experience in the field. The General Secretary is Mr. Hugh Joseph

The Union’s mission is to continue to struggle to improve the quality of life for its members.